After taking a screenshot in instrumentation tests, we often need it to be transferred back to the host computer. Here I explain different approaches I found.

To capture a screenshot during instrumentation test, we can use this function:

Here I summarize options how to deal with this.

Use this rule in the test class:

The files can be downloaded using adb pull.

In instrumentation tests, there are 2 APKs involved:

The permission has to be declared in the manifest of the app being tested:

For me, it did not work when added to the manifest in the androidTest source set (to appear only in the test app APK). It really had to be declared in the manifest of the real app. But you can use one of there workarounds:

Save screenshots to app data directory

Of course, we do not need any special permission for this.

To change the directory where the screenshots will be saved, we have to change the value of the protected member mDefaultScreenshotPath of BasicScreenCaptureProcessor:

Then, use this new processor:

How to download the files? For a debug build, we can use e.g.:

For a release build, we can use e.g.:

But this prints Now unlock your device and confirm the backup operation... and waits for the operation to be approved on the phone. I did not do any later experiments here about how to automate this, but maybe it is possible to automate it somehow. 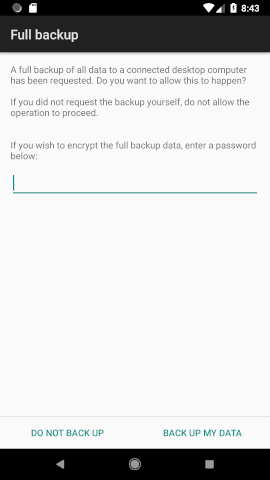 Use adb to take the screenshot

This is the approach I ended up using.

From the emulator, the host computer is accessible at IP address 10.0.2.2 and there is a high probability our app actually uses the INTERNET permission, so there are no additional permissions to be added only because of the tests.

Our special capture processor uploads the screenshots, instead of writing them to the filesystem:

One more thing we need to do is to run some HTTP server supporting PUT on our host computer. Here is some example using Python 2:

This code was inspired by A simple HTTP Server supporting put.

This is a very simplified solution:

So, make sure to use it only for testing purposes, and at least make sure to run it listening only on the loopback interface (127.0.0.1).

Run the HTTP server before running tests in a directory where you want the screenshots to be put:

(or 10005 for the Release configuration)